The Peregrine Falcon holds several distinctions. It is known as the fastest bird in the world, the fastest of all animals, and it is also the world’s most widespread raptor.

Peregrine Falcons are dark on the back and lighter underneath and they appear to have dark gray to black hoods on their heads.

Their crowns, foreheads, napes, and cheeks are black. They also have dark sideburns on their faces. Their eyes are dark with bright yellow earrings, yellow ceres (base of the bill), and gray to black hooked bills.

Their backs and wings are bluish-black with faint barring and black wingtips. Their throats and breasts may be all-white but sometimes they are spotted or barred. Their underwings, flanks, bellies, and thighs are heavily barred with black and white.

Their tails are bluish-black with bars, a black tip, and white rims. They have yellow legs and feet.

Females are larger but similarly colored as the males. Juveniles generally have brown coloring and they have heavily streaked underparts. Their eyerings and ceres are also bluish, instead of yellow. In flight, their underwings appear checkered, and their flight feathers and undertails are finely barred.

There are currently nineteen subspecies of Peregrine Falcons in the world and each of them has its own color variation, with some exhibiting paler, darker, brown, and rufous hues. Northern Peregrine Falcons exhibit the largest and darkest forms while those in Eurasia and Africa have the palest and smallest forms.

Peregrine Falcons are widespread throughout the world. In North America they breed predominantly in the arctic and migrate to coastal and southern states.

You can find Peregrine Falcons anywhere in the world except Antarctica. They prefer mountain ranges, open landscapes with cliffs, along rivers and coastlines, and more recently, in urban areas. Generally, they will stay in habitats that have an abundant supply of prey.

Peregrine Falcons are expert hunters, dive-bombing birds, practically any size, at extremely high speeds. Their typical prey include ducks, pigeons, jays, larks, ptarmigans, and starlings. On occasion, they may kill and eat bats and sometimes steal prey like fish and rodents from other hunting birds.

Nests of Peregrine Falcons are usually on cliff ledges, up to 1,300 feet high. In urban areas, they are mostly found on skyscrapers and tall bridges. In other regions, they use tree hollows for nests.

Typical nests are scrapes where the female “scrapes” a depression in the earth (either soil, sand, or gravel) and where she lays two to six eggs. Both parents take turns incubating the eggs for as many as thirty-three days with the male taking the day shift and the female at night.

The Peregrine Falcon was considered an Endangered Species from the 1950s to the 1970s because of DDT poisoning. When this pesticide was banned, the species began to thrive again. Today, it’s considered a species of Least Concern. 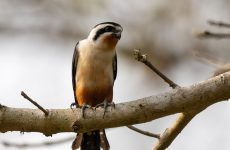