There are 23 species of vultures in the world and all 3 of those found in North America live in Arizona. These are the Turkey Vulture, Black Vulture, and California Condor. So this makes it one of the best states to spot vultures in the US.

If you enjoy finding out about birds of prey in Arizona then you should check out all the eagles and hawks you can spot here.

This guide will help you identify the types of Vultures spotted in Arizona according to avibase and uses data collected from bird watchers on ebird to give real information about when these birds can be spotted.

3 Species of Vultures in Arizona

Turkey Vultures are usually spotted in Arizona during the breeding season from March to October, but some hang around the southwest of the state all year. They appear in 30% of summer checklists and 4% of winter checklists submitted by bird watchers for the state.

Black Vultures are residents of Arizona all year and are mostly seen in the south of the state. They are recorded in 1% of summer and winter checklists.

California Condors are critically endangered species, but they have been spotted in Arizona mainly during summer in the northwest of the state.

They have pinkish air sacs in the throat and near the breast area, which puff out during courtship or for aggressive displays. They also have black feathers around the base of their necks. Their backs and wings are black. The underside of the wings have triangular white patches that are visible in flight. 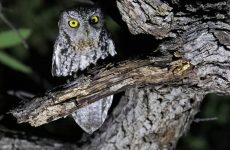