There are only one species of regular Hummingbird in Minnesota the Ruby-throated Hummingbird but a total of 7 species are recognized in state bird records.

Species of hummingbirds are classed as resident, seasonal or rare in each state and according to avibase and accepted by the Minnesota Ornithological Union these are the types of hummingbird in Minnesota in each group:

Resident Species of Hummingbirds of Minnesota:

There are no species of hummingbird classed as residents in Minnesota.

Seasonal Species of Hummingbirds of Minnesota:

Ruby-throated Hummingbirds are seasonal species of Humminbird in Minnesota.

Rare/Accidental Species of Hummingbirds of Minnesota:

Most of these accidental species have only been seen a few times in Minnesota.

Read on to find out everything you need to know about hummingbirds in Minnesota.

Ruby-throated Hummingbirds of Minnesota are a common sight in summer and they usually start to arrive in spring in April but mostly in May. Males usually arrive first up to one or two weeks before the females.

In the fall migration usually occurs between September to Mid-October but some hang along longer.

Rufous Hummingbirds are not very common in Minnesota but a few each year do wander this far north in winter. They are mostly spotted around Minneapolis. A good reason to keep your hummingbird feeders out in winter.

Calliope Hummingbirds are accidental hummingbirds in Minnesota and have only been spotted a few times. Duluth, 2016 was the last time, but they have been spotted near Minneapolis before that.

Although Rivoli’s Hummingbirds are considered an accidental species by the Illinois Ornithological Society I cannot find any recorded sightings.

Rivoli’s Hummingbirds are large hummingbirds with more striking coloring than most hummingbirds as they have an iridescent purple crown as well as the more usual iridescent throat in the males, which is emerald green. Males are dark green and the females are green on the back and grayish underneath.

Rivoli’s Hummingbirds are resident in Mexico and Central America but some do migrate north into southern Arizona and New Mexico and southwestern Texas. They can be found in pine-oak forests in mountainous regions but will visit feeders in their range. They build nests relatively high up.

An accidental species of hummingbird in Minnesota, Anna’s Hummingbirds have been spotted only a few times in the state in winter, but not for a long time.

Also, check out these great articles about birds in Minnesota:

How to Attract the Hummingbirds of Minnesota to Your Backyard

If you would like to attract more hummingbirds to your yard in Minnesota here are some tips: 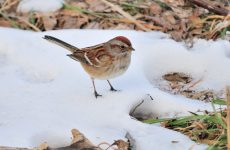 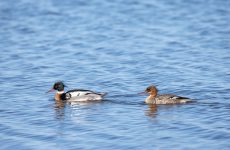