The Graylag Goose (Greylag Goose) is considered the ancestor of most breeds of domestic goose. They are mostly dark gray all over, with a pinkish-orange bill which sometimes has a white tip at the end, and dull pink legs.

Males and females look alike, but the females are slightly smaller than the males.

Graylag Geese in North America are often domesticated geese and may be too large to fly. Wild ones are rare to find here as they are originally from Europe.

You may find Graylag Geese in marshes, lakes, and reservoirs during their breeding season. They prefer habitats with thick ground cover like reeds, rushes, and bushes. In winter, they are seen on saltwater marshes, estuaries, bogs, and even on agricultural land.

Graylag Geese feed both on land and water. On land, they graze in pastures feeding on the grass with sheep or cows. They also feed on cereals, like oats, wheat, and barley, that they find in agricultural fields and farmlands.

Near or on water, Graylag Geese feed on aquatic plants and insects, such as small fish, amphibians, crustaceans, mollusks, and insects.

Nests of the Graylag Goose are usually found on the ground among tall reeds or shrubs. The female usually lays four to six eggs, and incubation only starts when the last egg is laid. She will incubate the eggs for about for weeks while the male defends the territory.

The feathers of Graylag Goose were used as quill pens and served to fletch arrows. 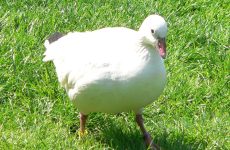