Common Grackles are blackbirds that are taller and longer tailed than a typical blackbird and with glossy iridescent bodies. Females are slightly less glossy than males.

Common Grackles are resident all year in southeastern states, but those that breed in Canada and the Midwest migrate south.

Their habitat is varied and includes open woodlands, marshes, parks, and fields. They eat many crops but mostly corn and gather in noisy groups high up in trees. They will also eat garbage and so can be a nuisance.

Although they may gather in their millions, they are on the IUCN red list as near threatened due to the 50% decline in their numbers since the 1970s.

They make a series of croaks, squeaks, and whistles.

Nests of Common Grackles are made of twigs, leaves, and grasses and are placed high up in conifer trees near water. They lay 1 – 7 eggs, which take about two weeks to hatch, and then the nestlings fledge in around another two weeks.

Attract them to your backyard with mixed grain and seed sprinkled on the ground or on platform feeders.

Common Grackles may gather in their millions in winter to forage and roost, mixed in with other species of blackbird. 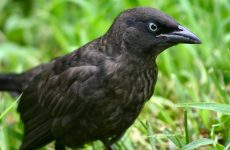 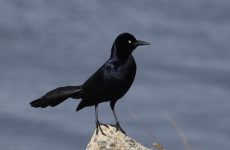