There are 8 species of hummingbirds in Wisconsin that have been spotted. Of these, 1 species is recognized on state checklists as regularly occurring, 6 additional species are considered rare or accidental, and an additional one regarded as near-threatened.

In Wisconsin, the hummingbirds considered as regularly occurring and also the most common species during summer are Ruby-throated Hummingbirds.

You can print out a free bird identification photo guide for Wisconsin to help you identify many of the birds that visit your backyard.

8 Species of Hummingbirds in Wisconsin

In summer, Ruby-throated Hummingbirds are the most frequently spotted hummingbirds in Wisconsin and appear in 14% of checklists submitted by bird watchers for the state.

They spend the breeding season in the state and are most commonly seen from April to Mid-October, but a few hang around into December.

Rufous Hummingbirds are considered near-threatened species in Wisconsin, but there are a couple of recorded sightings in the fall and winter.

Allen’s Hummingbirds are considered an accidental species in Wisconsin, but they were spotted in New Glarus in 2020.

Anna’s Hummingbirds are accidental species in Wisconsin, but there have been a couple of sightings around Oshkosh, Madison, and Milwaukee over the past ten years.

Green-breasted Mangoes are accidental species in Wisconsin, and according to records, they were spotted in Beloit back in 2007.

Green-breasted mangoes are glossy bright green on the back, and the males have a blackish throat bordered with blue on the chest. Females are white underneath with a black stripe in the middle with a few bluish-green metallic feathers.

Green-breasted Mangos are found near the coasts of Mexico and Central America and some down to northern South America. Their habitat is tropical deciduous forests, gardens, and open or lightly wooded areas.

The Green-breasted Mango is very rare in North America, but a few have been sighted in Texas on the southeastern border with Mexico.

Broad-billed Hummingbirds are considered an accidental species in Wisconsin, and they were last spotted in Thiensville back in 2011.

Mexican Violetears are considered rare or accidental species in Wisconsin, but they were recently spotted around Gay Mills and Fairview in 2020.

Buff-bellied Hummingbirds are accidental species in Wisconsin, and according to records, they were only spotted once in the state back in 2017.

The Buff-bellied Hummingbird is medium-sized, and the bill of the male is red with a darker tip, but the females’ bill is darker.

Nesting occurs from April to August in large shrubs or small trees, quite low to the ground. They lay two white eggs and may have two broods per year.

Semi-open habitats or woodland edges provide the ideal habitat for Buff-bellied Hummingbirds, and they will also visit backyards for flowers or nectar feeders. Small insects also make up some of their diets.

How Frequently Hummingbirds are Spotted in Wisconsin in Summer and Winter

Checklists for the state are a great resource to find out which birds are commonly spotted. These lists show which hummingbirds are most commonly recorded on checklists for Wisconsin on ebird in summer and winter.

Hummingbirds in Wisconsin in Summer:

Hummingbirds in Wisconsin in Winter:

How to Attract the Hummingbirds of Wisconsin to Your Backyard 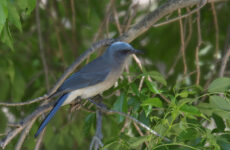 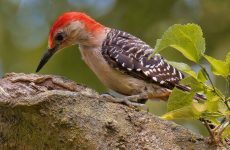