There are two main species of Hummingbird in Michigan but a total of 8 species are recognized in state bird records.

Species of hummingbirds are classed as resident, seasonal or rare in each state and according to avibase and accepted by the Michigan Bird Records Committee (MBRC) these are the types of hummingbird in Michigan in each group:

Resident Species of Hummingbirds of Michigan:

There are no species of hummingbird classed as residents in Michigan.

Seasonal Species of Hummingbirds of Michigan:

Rare/Accidental Species of Hummingbirds of Michigan:

Most of these accidental species have only been seen a few times in Michigan.

Read on to find out everything you need to know about hummingbirds in Michigan.

Ruby-throated Hummingbirds of Michigan are a common sight in summer and they usually start to arrive in spring in April but mostly in May. Males usually arrive first up to one or two weeks before the females. In the fall migration usually occurs between September to Mid-October.

Rufous Hummingbirds are not very common in Michigan but a few each year do wander this far north in winter. They are found in the south of Michigan. A good reason to keep your hummingbird feeders out in winter.

Mexican Violetears have only been spotted in Michigan a few times in summer near Lake Superior but not for many years.

Some non-breeding Mexican Violetears may fly north into the United States more commonly to Texas, but some have been spotted as far north as Michigan but very rarely.

Costa’s Hummingbirds are an accidental species in Michigan and have rarely been seen.

White-eared Hummingbirds are an accidental species in Michigan and have only been a confirmed sighting in 2005 and unfortunately have not been seen here since.

White-eared Hummingbirds range from Nicaragua up to the mountains in southeastern Arizona, southwestern New Mexico, and western Texas but they are rare in the United States. They usually nest between March to August in northern and central Mexico or later in July in Arizona and they may have 3 broods in a year. They migrate to arrive in the southern United States in March and leave by early September.

Berylline Hummingbirds are an accidental species of Hummingbird in Michigan. There was a rare event in 2014 that has not been repeated so don’t get your hopes up, you will have to head south.

Berylline Hummingbirds are metallic green with a gray lower belly and reddish in the wings. Females are less colorful than males and are slightly smaller. Their upper bills are black and the lower bill is reddish-orange.

They range from Mexico to Honduras in open woodlands of oak and pine and shady canyons and they will also stray up into southeastern Arizona. They are usually solitary birds and can be aggressive in defending their territory including at hummingbird feeders.

The only place in North America that Berylline Hummingbirds can be found is in southeastern Arizona in the Santa Rita Mountains, Huachuca Mountains, and Chiricahua Mountains during breeding between April and November.

An accidental species of hummingbird in Michigan, Anna’s Hummingbirds has been spotted only a few times in the state in winter.

An accidental species of hummingbird in Michigan, the Broad-billed Hummingbird has only ever been spotted a few times in the state.

Also, check out these great articles about birds in Michigan:

How to Attract the Hummingbirds of Michigan to Your Backyard

If you would like to attract more hummingbirds to your yard in Michigan here are some tips:

How to Identify Birds in Michigan

Here are some tips to help you identify birds whether you are out birding or backyard bird watching in Michigan: 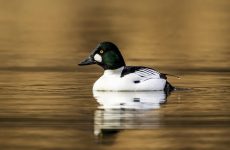