The national bird of Panama the Harpy eagle is rarely seen due to its remote forest habitat.

Named after the Greek mythological harpies that were flying monsters the Harpy eagle luckily does not live up to its’ namesake.

Harpy Eagles are very distinctive with long dark gray crest feathers on their heads which stand up when they feel threatened.

They are dark gray on the back and mostly white underneath with striped legs and a paler gray head. Their beaks are large, hooked and black.

Check out these amazing Harpy Eagle Facts to find out more about these unusual birds.

Harpy eagles when flying are as wide as a Cadillac, with legs as thick as a child’s wrist and talons the size of a grizzly bear.

Harpy Eagle females are up to twice the size of males.

Even if something as wide as a Cadillac is flying towards you the Harpy eagle’s wingspan would be considered small in comparison to albatrosses that regularly top 12 feet (3.7 m).

Harpy eagles have broad shorter wings as they are forest birds and not built for soaring.

Harpy eagles have the largest talons of any living eagle and can carry their own body weight in prey.

Their talons are 3 – 4 inches (10 cm) long and can carry off male howler monkeys without landing.

Tree-dwelling mammals of the forest, such as sloths and monkeys, are the main diet of Harpy eagles.

Other mammals such as anteaters, porcupines, armadillos and large carnivores such as kinkajous, coatis and tayras are also eaten.

Prey taken can weigh as much as the Harpy eagle itself buy is more often about half their body weight.

Females will take larger prey such as male howler monkeys or sloths weighing 13 to 20 lbs (6 to 9 kg).

Like many forest-dwelling predator birds, the Harpy eagle will usually sit on a perch and wait until the prey is spotted and then dive and grab it.

Harpy eagles are diurnal, which means they are active during the day.

Harpy eagles do not soar like other birds of prey but perch high up in trees watching and waiting for prey.

When prey is spotted they make a sudden burst of speed to snatch their prey, often remaining in flight to grab and go.

As most of their prey live in the forest, Harpy eagles are agile flyers and have to be able to fly between the branches at great speed, with sudden fast turns.

They glide between trees silently to catch their prey.

Watch the video below to see a Harpy eagle flying to catch prey.

Central and South American forests are home to the Harpy Eagle from Southern Mexico to Argentina.

Although rare they are more common in Brazil and are becoming rarer in many areas due to logging of the lowland tropical forest habitat where they live.

Only one chick every 2 – 3 years is common for a pair of Harpy eagles as they may spend up to 2 years rearing them from the time the egg is laid.

The second egg is a backup that is ignored if the first egg hatches successfully after about 56 days.

It takes 6 months for the Harpy chick to be ready to fledge but it is still reliant on its parents for another 6 to 10 months.

Harpy eagle chicks have white heads which turn darker as they get older.

Harpy eagles often mate for life and may reuse nests for several years. 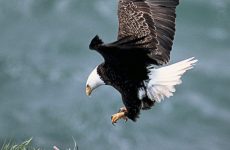 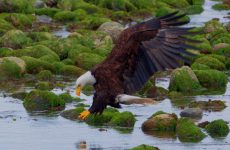 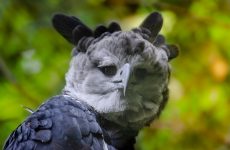