It can be quite difficult to tell warblers apart as most are in shades of yellow and they often sit high in the trees.

To add to the confusion some warblers molt and change into a more dull fall color to make spotting them harder.

So to get you started here are some easy-to-spot warblers that don’t all follow the yellow trend.

So don’t delay get spotting these migratory birds while you can.

These warblers are common in summer and not just during migration as they breed in most states. The distinctive black mask really pops against the bright yellow chest.

Common Yellowthroats are small songbirds that are brownish on the back and bright yellow underneath, with long tails.  The males have a black mask across the face.  The brightness of the yellow can vary geographically and they may be more olive in parts underneath.

They can be found in the spring and summer often in marshy or wetland areas and brushy fields living in thick, tangled vegetation.

They eat mostly insects and will be found in large backyards that have dense vegetation.

Palm Warblers have a distinctive reddish crown and spend most of their time on the ground wagging their tails. This makes them easier to spot than most warblers high up in the trees. Don’t let the name confuse you as they are not found on palm trees.

The palm warbler has a rusty red patch on the top of its head and is a browny-olive color over the rest of its body. The breed in Canada but can be found in eastern states during the migration and all year along the far south coast and Florida.

Palm Warblers breed predominantly in Canada and can be seen during migration in eastern US states. Some winter in Florida and along the southeastern coast.

Spring and fall is the best time to spot them in weedy fields, forest edges, and scrubby areas. They are often found foraging along the ground for insects, mixed in with other birds such as Sparrows, Juncos, and Yellow-rumped Warblers.

To attract more Palm Warblers to your backyard try planting native plants that attract insects and bayberry or hawthorn for their berries.

Parula Warblers breed over a wide area in eastern US states so you have more opportunities to spot this distinctive bird. The gorgeous bluish-gray back against the bright yellow throat and chest really set them apart.

With a colorful contrast of gray and yellow the Northern Parula is a cheery warbler found in woodlands.

They are bluish-gray on the back with a yellow patch on the back and with two white wingbars. Males have a chestnut band that separates the yellow throat and chest that adorns both males and females. Females are paler than males.

Northern Parulas breed in the Eastern States and southeastern Canada before heading to Central America and the Caribbean for winter. They may remain for winter in southern Florida.

Feeding on insects high up in deciduous forests and building nests in long clumps of lichen and moss that drape from the branches. The best way to spot them is by looking up at large clumps of hanging moss in the summer.

Another warbler of the east. American Redstarts breed in eastern Us states so there is more chance of spotting them. Their black and orange coloring really sets them apart from your usual yellow warblers.

American Redstarts are mostly black with bright orange patches and a white belly. Females are olive-gray instead of black and have yellow patches.

They can be found in deciduous woodlands eating insects and also in backyards and thickets eating berries such as serviceberry and magnolia.

Although they will usually only be spotted in spring migration these unusual dark warblers have a black cap and a thick white band under the eye. It’s best to look for them in spring as in fall they molt to yellow and make the journey south without really stopping.

Blackpoll Warblers are black-and-white with a black cap in the males. They look very different in late summer and molt into yellow with darker streaking on the back.

Blackpoll Warblers breed in Canada and can be seen during spring migration in the Eastern US. In fall they migrate back without really stopping to their winter grounds in South America and the Caribbean. They make the journey over the Atlantic Ocean non-stop.

Feeding mostly on spiders and insects, Blackpoll Warblers will also eat fruit such as honeysuckle and pokeberry in the fall.

Another unusual dark warbler makes the list for easy-to-spot warblers due to its rich blue and black tones with a flash of white underneath. Mostly spotted during migration in eastern states.

Male Black-throated Blue Warblers are a lovely rich blue color on the back and white underneath. They are unusual amongst the predominantly yellow warblers. Females are very plain in comparison and are grayish-olive.

They can be found in lower areas of deciduous forests, shrubby areas and sometimes gardens looking for insects.

The tiger stripes on the Cape May Warblers chest and unusual dark crown set this warbler apart from the rest. Usually spotted during migration over eastern states.

Male Cape May Warblers are distinctive heads that are framed in a ring of yellow around the neck, chestnut cheeks and dark caps. They are mottled yellow-olive above and yellow with dark streaks below.

Female and immature Cape May Warblers are less bright and lack the head coloring of the males.

Cape May Warblers winter in the Caribbean and a narrow band of the coast on the Yucatan Peninsula and Central America. They migrate to breeding grounds in Canada passing over Eastern US states.

They feed mainly in spruce budworm in summer but in winter they will eat fruit and nectar and will feed on hummingbird feeders.

A warbler that breeds in eastern US states so more chances to spot them. The males are bright yellow and blue-winged so a bright contrast to watch for. Streams and wet woodlands are your best bet.

Prothonotary Warblers are bright yellow with blue-gray wings and tails. Females are less bright than males.

Unusual for warblers, Prothonotary Warblers breed in eastern and southeastern states before migrating to Central and South America.

They breed in wet wooded areas that are flooded, near streams, or in swamps.

Prothonotary Warblers eat spiders, insects and snails. In winter they will also eat fruit and seeds.

Although not as distinctive in color as some warblers on the easy to spot list they are common on low branches so it’s easier to spot them during migration.

Magnolia Warblers males are black on the back and yellow underneath. They have black streaking from a ‘necklace’ on their necks down over their bellies. Females are grayer on the back and lack the distinctive streaking down the belly.

Magnolia Warblers breed across Canada and Northeastern US states in forests. They can be seen during migration in the Eastern US.

They spend the winter in Central America and the Caribbean.

It’s obvious why the hooded warbler made the easy-to-spot list due to the black coloring on the head with the bright yellow eye band. They also breed in eastern US states so again more chances to spot them.

Male Hooded Warblers have a bright yellow face with a distinctive black hood and throat. They are yellow underneath and olive-green above.

Females and immature are more yellow and without the black face markings.

They breed in eastern states before heading south into Central America and the Caribbean for winter.

Forests with dense understories to hunt for insects are the best place to find Hooded Warblers.

Now, why would a yellow-colored warbler make the easy-to-spot list? Well, let me tell you that this flash of almost total yellow is a bright contrast against the leaves. Also as they breed in eastern US states it makes recognizing them in summer, when all the other yellow warblers have migrated, is much easier.

The chestnut stripes and bright yellow cap set this warbler apart and make it easy to spot, mostly during migration

Chestnut-sided Warblers are stocky with a bright yellow crown, gray underneath and chestnut down the sides, in the breeding males. Females are paler than males.

Breeding in northeastern US states and southeastern Canada, Chestnut-sided Warblers can also be seen during migration over the Eastern US.

These warblers are more often found on forest edges or thickets looking for insects. 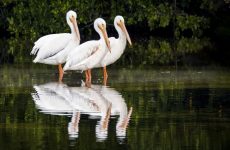 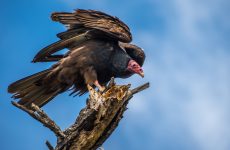 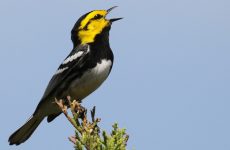 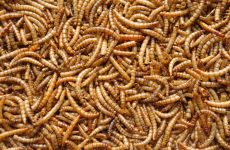