Two of the four species of eagle found in North America have been spotted in West Virginia. They are the Bald Eagle and Golden Eagle.

If you are interested in birds of prey, you should check out these guides to hawks in West Virginia or Vultures in West Virginia. Also, watch all the eagle nesting action on live cameras and find out incredible Bald Eagle Facts.

This guide will help you identify the types of Eagles spotted in West Virginia according to avibase and uses data collected from bird watchers on ebird to give real information about when these birds can be spotted.

2 Species Of Eagle In West Virginia

Bald Eagles can be spotted all year in West Virginia, but their numbers increase during winter from September to March. They are recorded in 2% of summer checklists and 6% of winter checklists submitted by bird watchers for the state.

When they’re nesting, roosting, or perching, Bald Eagles need tall, mature, and large trees for good visibility and have to have an open structure allowing the Bald Eagles to see the forest floor, and must be near water, especially when nesting.

Golden Eagles are not spotted very often in West Virginia, and although there have been a couple of sightings here all year, they are more common during winter from November to March in the east of the state. 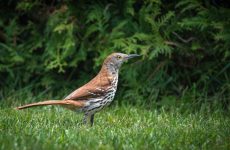