I find woodpeckers fascinating and often wonder why they don’t get a headache, especially in spring when their drumming increases. I love finding out fun facts about birds and have some great ones to share with you.

They also have some really gross habits that you have to check out if you dare!

1. They have weird feet

This adaptation helps them to climb up trees and hold on when looking for yummy larvae living under the tree bark and they also have short legs to help with stability.

These adaptations mean that woodpeckers are one of the best birds for climbing up trees but it also makes it harder to climb down so they usually fly.

2. They don’t get concussion even after all the head banging.

They hit their heads with over 1000g of force on trees but do not get a concussion, compared to a footballer getting brain trauma from less than 100g of force.

Scientists in China discovered that woodpeckers head is specially designed to transfer the strain down to the body so their heads only take about 0.3% of the force.

This small amount of strain in the head is converted into heat and woodpeckers have to take breaks to let their brain cool down.

3. They eat baby birds brains when thirsty in the desert

Gila Woodpeckers have been recorded attacking baby doves and eating their brains.

Don’t watch this video evidence if you are squeamish.

This behavior may have been because of the heat in the desert where they live and the brains are a source of fluid as well as food. It may also just be because they were an easy meal as woodpeckers are known to eat eggs and a chick head is quite like an egg.

Whatever the reason I am wearing my bike helmet around these woodpeckers!

4. They don’t wear their beaks out from constantly peaking at trees

You would think that woodpeckers’ beaks would break or they would wear them out.

But due to the chisel-like shape and because their beaks constantly grow it means that the constant wear and tear is prevented from causing a problem.

5. Their tongues curl around their brains

Woodpeckers have the longest tongues compared to their size of any bird. They use their tongues to rake out holes in trees they have drilled, dragging any insects they find out.

It is so long that they have to curl it around their brains over the top of their skulls.

Their tongues are sticky and sometimes barbed to help grab hold of prey. They can launch and retract their tongues at great speed, like a chameleon.

6. Some woodpeckers have a gruesome pantry filled with stored dead insects

Red-headed Woodpeckers store insects in holes they make in trees and can create their own pantry of both dead and alive insects.

They defend these sites and may cover the holes with bits of wood to try to disguise them.

Insects such as grasshoppers will be stored alive and stuffed in the hole so tightly that they cannot escape.

If you were pecking at wood all day then all that woodchip and dust must really get up your nose!

Not for woodpeckers as they have special feathers that cover their nostrils to prevent dust and splinters of wood from getting in the way.

8. There are over 236 species of woodpecker in the world

Although somewhat debated there are 236 species of woodpecker in the world according to the International Ornithological Union.

Woodpeckers are part of the Picidae family and there are 36 genera of woodpeckers in the family.

Woodpeckers live around the world, except for Australia, New Zealand, New Guinea, and Madagascar.

Woodpeckers use their tails for support when they are pecking on trees and hollowing out nests.

Woodpeckers have especially large tail bones, lower vertebrae, and muscles to support their tails, compared to other birds.

The tails of woodpeckers are especially stiff which enables them to use these as additional support and balance.

Acorn Woodpeckers live in large family groups and stay together to help raise more young. If there is more than one breeding female in a group the females will all lay their eggs in one nest.

This means that Acorn woodpeckers may be destroying eggs from their sisters or mum! The family unit then eats these eggs, so even worse the mum may eat her own eggs!

Once all the females lay eggs at the same time they stop destroying eggs but up to a third of eggs may have already been destroyed.

11. There are 18 species of woodpecker threatened with extinction

According to the International Union for Conservation of Nature’s Red List of Threatened Species, there are 3 species of woodpecker that are critically endangered, 5 species that are endangered, and 10 species on the vulnerable list.

Update: Recently the Ivory-billed Woodpecker has now been declared Extinct.

12. They are into Heavy Metal

Woodpeckers will bang on objects with their beaks to create a loud ‘drumming’ sound. They drum to attract a mate and to claim their territory and both male and female woodpeckers drum.

Usually, woodpeckers will drum on trees especially in the spring when they are focused on mating.

What is louder than trees…..metal of course. Woodpeckers will drum on metal objects such as signs, pipes, chimney caps, or anything that lets them be heard.

So however annoying that sound is for you it is music to the ears of woodpeckers as they may attract a mate.

Woodpeckers make notes and calls such as churrs, rattles, chatters, and screeches or short peek and pik sounds. Their calls lack distinct melodies and are not considered songs.

Woodpeckers do however make fantastic rhythms, tempos, and repetition by drumming to make up for their lack of vocal ability.

For songbirds, the strength and length of a song can show how healthy and strong a bird is and therefore how suitable a mate is, but for woodpeckers, it is their drumming performance that would set them apart as a suitable mate.

Woodpeckers are traditionally thought of as tree-dwelling birds however some woodpeckers have decided to make homes away from trees.

In areas where there are not as many trees woodpeckers have to adapt to find a nest site. In the desert habitat of Gila Woodpeckers in North America, they have adapted to using Cacti as nest sites and will dig out a hole to use.

Some woodpeckers have abandoned trees altogether and spend their time on the ground foraging for food and building nests in earth banks on the ground, such as the Ground Woodpecker from Africa and the Andean Flicker from South America.

Termite mounds provide a dinner spot and nesting location for the Buff-spotted Woodpecker, also in Africa.

Woodpeckers have excellent hearing and can hear the sound of insects and larvae moving and chewing in wood.

They use the sound to locate their prey, buried under the bark, to know where to start pecking to get to the juicy larvae.

If you can hear bugs moving inside trees you must have good hearing!

16. Nests will be about a foot below the entrance

Woodpeckers don’t just dig a hole straight into trees otherwise predators such as raccoons would be able to easily take the young. Woodpecker nests are different sizes depending on the species of woodpecker with the cavity hole just bigger than the bird.

The depth of the nests is to help stop predators from attacking their young.

Smaller animals tend to have a shorter lifespan. The reasons for this are still being investigated but it was once thought that smaller animals had a higher metabolism but this has since been shown to not be the main factor in how long you live.

It is probably a combination of reasons including smaller animals are easier targets for predators, DNA differences, and hormones, plus lots of factors that scientists are not aware of yet.

According to science in general, larger birds live longer than smaller birds, with an albatross living 68 years! Woodpeckers tend to be shorter-lived than that, but they are smaller.

18. A group of woodpeckers is called a descent

Often you will only see one or two woodpeckers as they often forage on their own or are in a breeding pair. However, Some woodpeckers such as Acorn Woodpeckers live in large communal family groups. 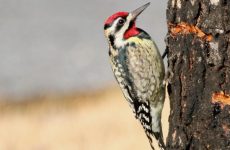