Which of these types of hawks have you spotted in Massachusetts? Have you managed to spot all 8 species?

There are 8 species of Hawk in Massachusetts:

The most common hawk in Massachusetts is the Red-tailed Hawk.

To find Hawks in Massachusetts head to woodland for the smaller hawks such as the Sharp-shinned Hawk and Cooper’s Hawk or open grassland, marshes, or high ridges for the larger species.

The 8 Species of Hawk in Massachusetts

The Sharp-shinned Hawk is the smallest hawk in Massachusetts. They are smaller than a crow but slightly larger than a Jay.

Red-shouldered Hawks can be found all year in Massachusetts. They tend to be seen near wet forests hunting along a stream or pond. Their prey is mammals and frogs or snakes.

Broad-winged Hawks breed in Massachusetts, more often in the north of the state, before migrating in large numbers to South America in a swirling flock called a kettle. They are not often observed in Massachusetts, being in less than 1.5% of recorded checklists on ebird.

Lemmings and voles provide most of the prey for Rough-legged Hawks. Voles, mice, ground squirrels, and other small mammals provide winter prey in states such as Massachusetts. Nests are usually on a high cliff ledge and they lay 3-5 pale bluish-white eggs.

The Northern Harrier can be found in Massachusetts all year but is more common in Winter.

Northern Goshawks are in Massachusetts all year. They live in large forests so are hard to find, especially as they are very secretive and can be aggressive if you get too close to a nest. 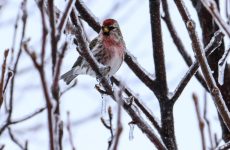 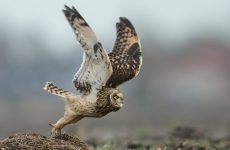 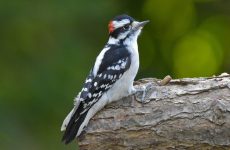