There are 7 species of Hawk in Indiana:

The most common hawk in Indiana is the Red-tailed Hawk.

To find Hawks in Indiana head to woodland for the smaller hawks such as the Sharp-shinned Hawk and Cooper’s Hawk or open grassland, marshes, or high ridges for the larger species.

If you enjoy finding out about birds of prey in Indiana then you should check out all the eagles and vultures you can spot here.

The 7 Species of Hawk in Indiana

Although highly migratory, the Sharp-shinned Hawk can be seen all year in Indiana. They are not very common and are in less than 2% of bird sightings in Indiana.

The Sharp-shinned Hawk is the smallest hawk in Indiana. They are smaller than a crow but slightly larger than a Jay. The females are a third bigger than the male. They have long tails, with a square end, and short, rounded wings and have small heads.

They are very secretive but can be seen as they fly across open areas at the edges of forests. They are very agile and can speed through dense woods to catch their prey in flight, usually songbirds. They can sometimes be seen near feeders catching small birds, but if you have problems with them in your backyard remove the feeder for a few weeks.

Cooper’s Hawks can be seen all year round in Indiana. They are common woodland hawks that have been observed nearly 4 times as often as the Sharp-shinned Hawk. They have been sighted in 6% of checklists in Indiana.

The Red-shouldered Hawk can be found all year in Indiana.

Broad-winged Hawks breed in Indiana, more commonly in the south of the state. They migrate in large numbers to South America in a swirling flock called a kettle. They are not often seen in Indiana and account for less than 1% of sightings in the state. The migration in fall is the best chance to see them.

Red-tailed Hawks can be found in Indiana all year and are common, being seen in over 15% of sightings in Indiana.

The high-pitched descending raspy-screech sound of the Red-tailed Hawk is often used in movies for all raptors. They eat small mammals, birds, and reptiles. Nests are high in very tall trees or on cliff ledges and sometimes on tall buildings or towers. They lay 2-3 whitish, brown blotched eggs.

Rough-legged Hawks migrate from the arctic and are found in Indiana in the winter. They are more common in the north of the state but still are only seen in less than 1% of sightings.

The feathered legs give the Rough-legged Hawks their name and help to keep them warm in the arctic. They are fairly large hawks, between the size of a crow and a goose. This predominantly dark-drown species occurs in both light and dark forms, with dark patches at the bend of the wing, end of their tails, and across the belly. They have broad wings that are fairly long and narrow, compared to other hawks.

Lemmings and voles provide most of the prey for Rough-legged Hawks. Voles, mice, ground squirrels, and other small mammals provide winter prey in states such as Indiana. Nests are usually on a high cliff ledge and they lay 3-5 pale bluish-white eggs.

The Northern Harrier is in Indiana in winter.  This slim, longed-tailed Hawk can be seen gliding low over grassland or marshes. 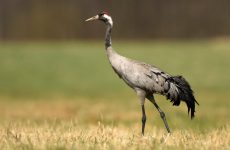