Gray Catbirds are so named because of their distinctive catty mew song that can last for up to 10 minutes. They are medium-sized songbirds with a slate gray coloring, black cap and tail, and a reddish patch under their tails.

Gray Catbirds breed in the Midwest, eastern US states, and southern Canada before heading to the Gulf Coast and the Caribbean for winter. Some remain all year along the East Coast.

You can find Gray Catbirds in dense shrubs, small trees, and along forest edges or hedgerows. They are named after their ‘mew’ sounding call.

Gray Catbirds usually eat insects like ants, beetles, grasshoppers, caterpillars, and moths during summer. They will also eat fruits like berries, cherries, and blackberries. They can sometimes be considered garden pests because they eat these fruits where they’re available.

Nests of Gray Catbirds are usually hidden deep within the center of dense shrubs and small trees. The female builds the nests on horizontal branches using twigs, straw, bark, and mud. She softens the inside with grass, hair, and pine needles. The female lays one to six eggs which she incubates for about twelve to fifteen days.

Attract them to your backyard with fruit and fruit trees or shrubs such as dogwood, winterberry, and serviceberry.

Gray Catbirds are related to mockingbirds and thrashers so they share a talent for mimicking other species’ sounds and combining them to create their own songs. 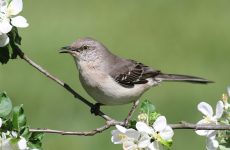