Six of the thirteen species of geese found in North America have been spotted in North Dakota. They are usually spotted here during migration in spring and fall.

6 Types Of Geese In North Dakota:

Canada Geese are spotted in North Dakota all year. They are recorded in 31% of summer checklists and 10% of winter checklists submitted by bird watchers for the state.

Cackling Geese spend winter in North Dakota, but their numbers increase from March to April and October to November. They occur in 1% of winter checklists and up to 15% of checklists during migration.

Greater White-fronted Geese are mainly spotted in North Dakota during migration from March to May and October to November, but some are also spotted here during summer.

Ross’s Geese are spotted migrating across North Dakota, mainly from March to April and October to November. They appear in 4% of checklists during migration.

Brant Geese are accidental species in North Dakota. They are extremely rare in the state and were last spotted around Pettibone back in 2005. 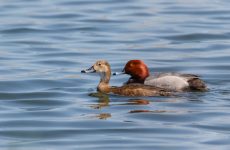