Six of the thirteen species of geese found in North America have been spotted in Nevada. They are visitors here in winter, except for Canada Geese which can be spotted all year.

If you enjoy spotting waterbirds in Nevada, you should also find out more about ducks in Nevada or swans in Nevada.

6 Types Of Geese In Nevada:

Canada Geese are very common in Nevada, and although they are spotted in the state all year, they are more common during winter. They are recorded in 13% of summer checklists and 32% of winter checklists submitted by bird watchers for the state.

Snow Geese are mainly spotted in Nevada from October to mid-May and occur in 5% of winter checklists. However, some can also be spotted in the state all year.

Although some can be spotted here all year, Greater White-fronted Geese usually spend winter in Nevada, from September to April, and they appear in 2% of checklists at this time.

Ross’s Geese are winter birds in Nevada and are mainly spotted from November to April, but some are occasionally spotted all year. They are recorded in 2% of winter checklists.

Cackling Geese are spotted in Nevada from October to May and occur in 1% of winter checklists.

Brant Geese are accidental species in Nevada. They are extremely rare in the state and were last spotted around Henderson in 2017. 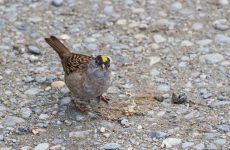