If you are having trouble identifying ducks with white heads in North America then check out this guide about the eight that can be spotted here.

Males and female ducks often look different especially during the breeding season, so it can be difficult to identify them. These ducks are ordered from most common to least common.

Check out markings on the ducks, especially white areas as these are the best way to identify the type of duck.

Buffleheads are small birds with bulbous heads, hence their name, “bullheaded,” from ancient Greek. Male Buffleheads are easily recognizable because of the huge white patch on their head behind their eyes.

This patch highlights the glossy green and purple colors on the crown, forehead, throat, and neck. The bottom half of their bodies are white, while the upper half is black.

Female Buffleheads look nothing like the males, except for the bulbous head. They have dark brown or black heads with a small white patch below the eye. Their bottom half is gray, and their top half is black. Juveniles look similar to females with their brown heads and a white patch on the head.

Buffleheads breed mainly in Canada before migrating to the US, northern Mexico, and Canada’s Pacific coast. They can be seen during migration in the Midwest and the Appellations.

You can find Buffleheads in small lakes and ponds with nearby poplar and aspen forests during the breeding season. In the winter, they move to protected coastal waters or shallow bays and inlets.

Buffleheads mostly dive as they forage for food. They catch mollusks, crustaceans, and aquatic insects, which they eat while underwater.

Male Hooded Mergansers are striking ducks because of the crests on their head that they can raise or lower, which then changes the shape of their head and the pattern of the crest.

When open, the crests are huge white patches, but when closed, they are a thick white line.

Apart from the white crests, their heads are black, and they have golden yellow eyes. Their bodies are black, except for their cinnamon-colored flanks and white chests. They have two black bars on their chests, and their lower backs have white stripes.

Females have the same crest, but theirs is reddish-brown.

You can find Hooded Mergansers in freshwater lakes, ponds, and slow-moving rivers. They prefer to breed in small, forested ponds and estuaries with lots of aquatic vegetation. During migration, they visit a wide range of habitats, like open water, coastal bays, and tidal creeks. In winter, they are found in brackish swamps, saltwater bays, and inlets.

The Long-tailed Duck is a small diving duck that has rather obvious slender, long and black tail feathers, hence the name.

Adult non-breeding males have white crowns, foreheads, necks, backs, sides, and bellies. They have a gray mask and a dark cheek patch, a pink band across their black bill, and black breasts and wings with white shoulder blades. Their tails are long and black.

Their coloring reverses during the breeding season or in summer. Everything that was white is now dark-colored.

Adult non-breeding females have dark crowns, white heads with a dark patch on the cheek, and gray bills. They have white necks and bellies. Like the males, their coloring reverses during the breeding season.

Long-tailed Ducks breed in the far north of Canada and Alaska and across northern Europe and northern Asia. In winter, they migrate south to the US, and those in Europe and Asia move south in these regions.

You can find Long-Tailed Ducks in many coastal water habitats. They are often in bays, harbors, fjords, estuaries, straits, and mudflats. During the breeding season, you can find them along ocean coasts and large freshwater lakes. They are known to join large flocks in areas with extensive sea ice.

Common Eiders are large sea ducks with sloping foreheads. Breeding males generally have white cheeks and backs, black caps, sides, and bellies, and pistachio-colored napes (back of the neck).

Common Eiders breed in Canada and Alaska and parts of northern Europe and Asia. Some remain in those areas in winter all year, but others migrate south.

You can find Common Eiders in marine or saltwater habitats that are near rocky coastlines. During the breeding season, you can find them in large colonies on coastal islands, islets, and shorelines with vegetation, shrubs, and stunted trees.

In winter, they settle in locations with rocky seafloors to easily forage for mollusks.

There are wild and domesticated Muscovy Ducks. Wild ducks are glossy, dark-colored, and with a less-obvious white wing patch. Males have a short crest on the nape.

Domesticated Muscovy Ducks may show a varied combination of dark brown, white, and black coloring. Both types of Muscovy Ducks have the same red, wart-like spots on their faces.

Muscovy Ducks are predominantly from Mexico, Central America, and South America. However, escaped domesticated Muscovy ducks can be found in many areas.

Male King Eiders are large ducks that are often easily identifiable because of their multi-colored heads and distinct orange knob with a black outline above their short red bills.

Their crown and nape are pale-blue, but their face is greenish. Their chests are white, and their wings, bellies, and back are black. They have white patches on their wings and on the base of the tail.

From a distance, their heads can look white.

Female King Eiders, or Queen Eiders, as they’re commonly called, are brown in color all around.

Juveniles are dark brown like the females but have a white chest and orange bill like the males.

King Eiders breed in coastal northern Canada before migrating for winter to the south coast of Alaska and the east coast of Canada, and the coasts of northeastern US states.

You can find King Eiders, usually near water and in barren tundra habitats, and they prefer rocky coasts and the open seas. They will usually mix with other wintering birds in coastal waters and can form flocks exceeding 100,000 birds. During the breeding season, they are seen in and around freshwater lakes and ponds.

Breeding Adult Male Steller’s Eiders have an interesting coloring and pattern. They have white heads with black markings. They are buffy underneath, their bills, legs, and feet are blue-gray.

Adult Females are dark brown with a light white eyering.

You can find Steller’s Eiders in very limited habitats. They’re birds of the coastlines of Alaska and Eastern Russia, and they mostly stay in coastal bays and lagoons during winter and when molting.

Look for them around tidal flats when molting because that’s where they stay when they rest, as they’re flightless at this time. During nesting season, they stay in coastal tundra with sedge marshes and freshwater ponds.

Spectacled Eiders are small ducks that are recognizable for their unique “spectacled” faces. Males have a more prominent “goggles” feature on their white faces. They have greenish feathers at the back of their heads, and their bills are bright orange with white feathers extending up to the tip.

Their upperparts are white, and their underparts are black. Females and juveniles have light brown heads and brown bodies.

Spectacled Eiders breed in Alaska and eastern Russia and winter in the Bering Sea.

You can find Spectacled Eiders along the open seas, coasts, and tundra (treeless plains in the Arctic) habitats. Their nesting sites are in small islands in lakes, particularly with grasses and marshes near the water’s edge. During the winter, they move to large breaks in the sea ice or polynyas. 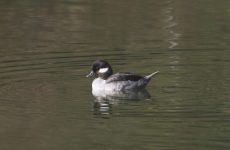