If you are having trouble identifying ducks with brown heads in NorthAmerica then check out this guide about the eleven that can be spotted here. Some of them are female ducks, which often look different than males.

These ducks are ordered from most common to least common.

Check out markings on the ducks, especially white areas as these are the best way to identify the type of duck.

Buffleheads are small birds with bulbous heads, hence their name, “bullheaded,” from ancient Greek. Male Buffleheads are easily recognizable because of the huge white patch behind their eyes.

This patch highlights the glossy green and purple colors on the crown, forehead, throat, and neck. The bottom half of their bodies are white, while the upper half is black.

Female Buffleheads look nothing like the males, except for the bulbous head. They have dark brown or black heads with a white patch below the eye. Their bottom half is gray, and their top half is black. Juveniles look similar to females with their brown heads and a white patch on the head.

Buffleheads breed mainly in Canada before migrating to the US, northern Mexico, and Canada’s Pacific coast. They can be seen during migration in the Midwest and the Appellations.

You can find Buffleheads in small lakes and ponds with nearby poplar and aspen forests during the breeding season. In the winter, they move to protected coastal waters or shallow bays and inlets.

Green-winged Teals are small dabbling ducks. Males have a green stripe along the sides of their heads. The rest of their heads are brown, and they have grayish bodies.

Females are brown with a yellow streak along the tail. Both males and females have a green wing patch.

Most Green-winged Teals migrate from breeding grounds in Alaska, Canada, and northern US states to the southern US states and the Pacific Coast. However, some ducks remain around the Rocky Mountains all year.

You can find Green-winged Teals on flooded ground and shallow ponds in large flocks of up to 50 thousand. They feed on invertebrates and seeds.

Common Goldeneye males have green heads that are iridescent and can look almost black. They have a white spot under their yellow eyes. They have white bodies and sides and black backs.

Female Common Goldeneyes are grayish-brown with brown heads. Both males and females have black bills, but females have a yellow tip.

Common Goldeneyes breed in Canada and Alaska in summer and migrate late to the lower 48 for winter.

Red-breasted Mergansers breed in Canada, except in the southwest, before migrating to the coasts of the US and Canada. They can be spotted during migration in southwestern Canada and all US states.

You can find Red-breasted Mergansers in tundra ponds, freshwater lakes and rivers, and brackish and saltwater wetlands, usually near the coast during the breeding season. In winter, they may also be found in the ocean.

Northern Pintails are ducks known for their long pointy tails. Males have a beautiful brown head, with a contrasting white vertical stripe down their neck. Their bodies are white, and they have gray, white, and black patterns on their back. When in flight, their wings display a green patch.

Females are brown with intricate scaled patterns on their bodies. They also have a brown patch on their wings.

Northern Pintails breed in Canada, Alaska, and the Midwest before migrating to southern and coastal US states.

You can find Northern Pintails living with other duck species in open wetlands, marshes, prairies, and even in agricultural fields. They forage on the edges of lakes and ponds but are known to dabble in open water with other ducks. During winter, they will migrate to coastal lagoons, sheltered estuaries, and brackish marshes.

Redheads are exactly what these medium-sized diving birds are. They have a striking red head, contrasting with a black throat and chest and a gray body. Their bill is blue-gray with a black tip. Females share the same bill but are otherwise brown all over.

Redheads breed in western Canada, Alaska, and western US states before migrating for winter to southern US states, the east coast of the US, Mexico, and the Caribbean.

You can find Redheads in marshes, open lakes, reedy ponds, and bays where the water is deep enough to dive and root out plant vegetation. In winter, they migrate to coastal shorelines with calm waters or in reservoirs and estuaries.

Male Canvasbacks are easily recognizable ducks from the Anatidae family because of their red eyes and sloping reddish-brown heads and throats. Their chest is black, but their bellies and backs are white or grayish. Their bottom is black too. Females are mostly brown in the head, throat, and chest, but their backs and bellies are brown and gray.

Canvasbacks breed in western Canada and some areas in northcentral states before migrating to southern US states, Mexico, and the east and west coasts of America.

You can find Canvasbacks in prairie marshes, deep-water marshes, lakes, bays, and ponds. They usually join large flocks with other birds, but their white bodies and sloping heads easily make them stand out. In winter, they prefer to live in freshwater lakes and coastal waters.

Eurasian Wigeons stand out among dabbling ducks because of the bright, creamy patch on their heads that contrasts with their cinnamon-red head and blue-gray bill. Their backs are gray as well as their sides. They have pinkish breasts, and their wings have white shoulder patches with a green layer at the bottom. Females are mostly brown, with scaly patterns all over and white bellies.

Eurasian Wigeons can sometimes be spotted during winter in the US in a few areas.

You can find Eurasian Wigeons on wet grasslands, tidal flats, marshes, ponds, and lakes. Eurasian Wigeons usually join other dabbling ducks when they forage for food. They eat aquatic vegetation that is either submerged or just below the surface of the water.

Garganeys are small dabbling ducks. The males are interestingly multi-patterned. The top of their head has a black line running to their neck, while a striking white line above the top of their eye weaves its way down to their back.

Their face and throat are brown and uniquely lined. Their back is striped gray, black, and white. Their belly is grayish-white. When in flight, a green or blue line with white borders appears on their wings.

Female Garganeys have different feather patterns. They have no vertical stripe from the eye. They are mostly dark brown all over, with a scaly pattern on their back, chest, and belly.

Garganeys usually breed in Eurasia and winter in Africa and southern Asia, but some wander into Alaska.

You can find Garganeys around shallow freshwater lakes, reedy wetlands, and marshes with abundant vegetation on the edges.

The White-cheeked Pintail is a dabbling duck that also goes by the name Bahama Pintail or summer duck.

White-cheeked Pintails are beautiful ducks. Both sexes look the same. They both have brown, streaked foreheads and napes. They have a white patch on their cheek extending to their throat. Their bills are blue with a distinct red spot at the base. The rest of their bodies are covered with black and brown spots.

White-cheeked Pintails are usually found in the Caribbean and South America, but they also are found in southeastern US states.

You can find White-cheeked Pintails in saltwater habitats, like lagoons, rocky or sandy seashores, and mangroves. They may also be found near rivers, lakes, and ponds. On rare occasions, they may be found in brackish water and shallow marshes.

Females are less striking, but their pattern combinations are stunning. They are mostly brown and have a scalloped pattern, gray-brown colored backs, and flanks. They do share the same long, black bill with the gray band as the males.

Common Pochards are usually found in Eurasia and Africa, but they occasionally wander into Alaska.

You can find Common Pochards in different types of water habitats, like lakes, reservoirs and hardly-moving rivers, and marshes. They prefer areas with dense vegetation along the shoreline and a water depth that’s suitable for diving. They may also be occasionally found in brackish water areas, but they much prefer freshwater habitats. 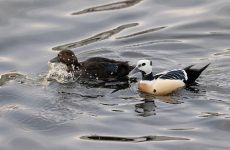