If you need help identifying birds with red chests in North America, then you have come to the right place. Get photos, identification help, bird calls, and what you need to know about where you might spot them and at what time of year.

All this information will really help you to identify those birds with red chests. So take a look and see if you can spot the bird you are looking for.

Common Rosefinch males are bright red on the head, chest, and rump and brown with hints of red over the rest of the body.

Common Rosefinches are rarely seen in North America as they are usually from Europe and Asia. However, they have been seen mainly in the western edge of Alaska in summer.

Nests of Common Rosefinches are often made of grass, weeds, roots, and animal hair. You will find them low to the ground. Females usually lay between three to six eggs, and they take about two weeks to hatch.

Attract Common Rosefinches to your backyards by offering seeds, peanuts, and fruit.

Fun Fact: Common Rosefinches are also known as Scarlet Rosefinches because of their reddish color.

Common Redpolls are small and have red foreheads and are brown and white streaked over the rest of their bodies. Males also have red chests, but females do not. They have small bills for finch and a short notched tail.

Common Redpolls breed in artic in Canada and spend the winter in the rest of Canada and northern US states and less frequently in central US states.

You can find Common Redpolls in weedy fields or feeding on catkins in trees, but they will also come to feeders for small seeds such as nyjer seeds or thistle.

Nests of Common Redpolls are hidden in rock crevices or in dense, low shrubs. To keep the nests and the eggs warm, they are usually built out of moss, feathers, plant material, and animal hair. The female lays four to seven eggs that she incubates for about eleven days. Even after they hatch, the young still stay in the nest and are cared for by their mothers for two more weeks.

Attract Common Redpolls to your backyard by feeding them nyjer seeds and shelled sunflower seeds.

Fun Fact: Common Redpolls can survive temperatures of -65 Fahrenheit without freezing to death. They add around 30% more feathers to stay warm.

White-winged Crossbills are finches with heavy crossed beaks. Males are red on their heads and chests and with black wings and tails and two white wingbars. Females are yellow and brown and with two white wing bars.

White-winged Crossbills live in forests in Canada, Alaska, and sometimes the northern US states when cone crops are poor further north.

You can find White-winged crossbills in spruce forests feeding on seeds.

Nests of White-winged Crossbills are nestled in horizontal tree branches. They are made of twigs, bark, grass, moss, and lichens. There are as many as five eggs in a nest, with the female incubating them for two weeks until they hatch.

Fun Fact: Unusually, these birds breed at any time of year as long as there is enough food. They can often be heard in large flocks.

Pine Grosbeaks males are red birds with gray on the wings and tail and two white wingbars. Females are gray with dull orange heads and rumps. They are large for finches and relatively slow.

You can find Pine Grosbeaks in forests of pine, spruce, and fir, feeding on seeds, fruit, and buds from these trees. They will also eat some insects in the summer.

Nests of Pine Grosbeaks are commonly found ten to twelve feet above the ground on a low tree. The nests are made of twigs, barks, weeds, moss, and lichen and hold two to five eggs. The female incubates these eggs for about two weeks until they hatch.

Pyrrhuloxia feed mostly on seeds but also on insects. They can be found at feeders with sunflower seeds but more often prefer them scattered on the ground.

Rose-breasted Grosbeaks males are black-and-white birds with black heads and backs, white bellies, and red chests. They also have a flash of red under their wings.

Female Rose-breasted Grosbeaks and immature males are brown with lots of streaking and a flash of yellow under the wings.

Rose-breasted Grosbeaks breed in northeastern US states, the Midwest, and southern and central Canada. They can be seen during migration in southeastern US states. Winter is spent in Mexico, Central America, and the Caribbean.

You can find Rose-breasted Grosbeaks in many habitats from forests, fairly open areas, parks, and backyards. They eat mainly insects in summer, berries during migration, and a mix of insects, seeds, and grain in winter.

Nests of Rose-breasted Grosbeaks take up to nine days to make from twigs, grass, straw, and other plant material. They lay up to five eggs which take two weeks to hatch, and the young take a further ten days to leave the nest.

Attract Rose-breasted Grosbeaks to your backyard with sunflower seeds and peanuts.

American Robins are a common sight on lawns eating earthworms. They have black heads and backs with red or orange breasts. They tend to roost in trees in winter, so you are more likely to see them in your backyard from spring.

Attract American Robins to your backyard with sunflower seeds, suet and peanut hearts, fruit, and mealworms. Platform feeders are best or food scattered on the ground. Also, try planting some native plants that produce berries, such as juniper, sumac, hawthorn, and dogwood. 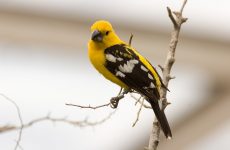 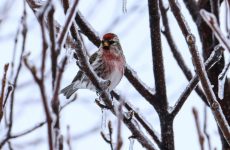 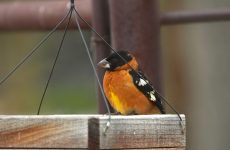 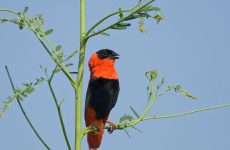 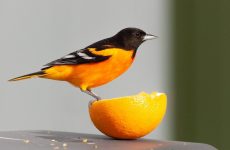 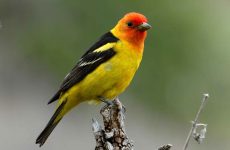