The most striking feature of the Breeding Adult White-faced Ibis and the reason why it’s named such is the white band surrounding its pink face, red eyes, and long, downward-curved red bill.

Apart from that, it’s red-brown/bronze head, throat, and body, and glossy, green wings make it pretty similar to the Glossy Ibis. Other differences include the long, gray bill and the red legs of the White-faced Ibis.

Non-breeding White-faced Ibises look similar but have a white band on the face. Juveniles are browner with pale cheeks, and patches of white feathers on the neck. The glossy, green coloring is visible on the wings.

You can find White-faced Ibises among shallow wetlands that provide ample cover from reeds, sedges, and grasses. Also on agricultural land, pastures, and hayfields.

White-faced Ibises forage using their large bills to probe muddy waters. They usually use this tactic when hunting in shallow water. They may swing their bills side to side to disturb their prey and make them come up to the surface where they can easily be picked off.

They eat a variety of prey like crayfish, earthworms, snails, clams, dragonflies, crickets, grasshoppers, flies, and bugs. They may capture fish, frogs, and small rodents too.

Nests of white-faced Ibises are platforms made from available materials in the nesting site and built on vegetation, trees, or on small islands. The female lays three to five eggs that are incubated for around twenty days. 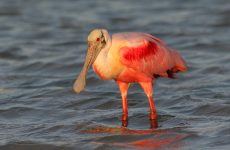 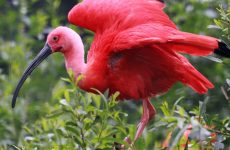 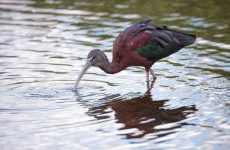