White-eyed Vireos have a gray head with yellow around their forehead and white eyes. Their chests and throats are white, and they have yellow sides, greenish backs with darker wings, and two white wingbars.

White-eyed Vireos spend the summer across the southeastern United States, hidden in thickets out of sight. Those near the coast remain all year. They winter along the southeast coast of Mexico and the Caribbean.

You can find White-eyed Vireos in overgrown pastures and brambles, feeding on insects, flies, and spiders. In winter, they also eat berries.

Nests of White-eyed Vireos hang from branches in shrubs. They use spiders’ webs to make the initial shape and stick leaves, bark, and plant material to it to form a hanging cup.

They lay around four eggs which take two weeks to hatch and ten days for the young to leave the nest.

Both male and female White-eyed Vireos sing in winter, but in spring and summer, only the males sing, and oh boy, does he sing from dawn until lunchtime. 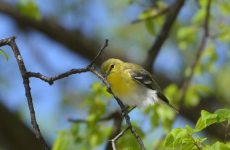