These are the 11 species of red birds in Ohio that you can spot in your backyard or when out birding.

Some of them you may be familiar with such as a Northern Cardinal but some of these red birds are not often spotted in Ohio and so you may have a rare find.

Red birds visit Ohio at different times of the year and some may breed in the state and some stay for winter.

I have gathered all the information you need to know such as when these red birds are in Ohio, what they look like and where they are commonly seen.

Finches and Tanagers are the most common red birds that you can spot but there are several different species to learn.

Purple Finch are red birds of Ohio that can be spotted all year. They are not as common as House Finch in Ohio.

House Finch are very common red birds in Ohio, that can be spotted all year.

Common Redpolls are cheery red birds in Ohio in winter. They are most frequently spotted between November and March but some hang around into May.

Vermilion Flycatchers are very rare red birds in Ohio. They have occasionally been spotted in early winter in Ohio. If you want to spot this bright red bird then you will have to head further south.

Scarlet Tanagers are bright red birds that in Ohio that breed here in the summer and can be spotted between April and October. Some Scarlet Tanagers will stay in Ohio as late as November or December.

Summer Tanagers are not very common in Ohio but can be spotted in the summer. They are mostly spotted between May and October but some hang around until January.

Red Crossbill are rarely spotted in Ohio but a few can be seen throughout the year.

White-winged Crossbills are rare in Ohio but some can be spotted in winter between November and May, more commonly in north Ohio around Cleveland.

Pine Grosbeaks are very rare in Ohio but a few have been spotted in winter in the state in the North.

Painted Buting are rarely spotted in Ohio but a few may appear in winter. They have mostly been spotted between Cleveland and Cincinnati. 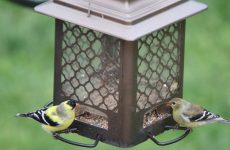