Pelicans breed in colonies of up to 50,000 birds and depending on the species, they may either be ground-nesting or tree nesting. After about 25 days in the nest, the young will gather in ‘creches’ of up to 100 young birds, and amazingly the parents will recognize their own chick and only feed them.

This guide will help you identify the types of Pelicans spotted in New Jersey according to avibase and uses data collected from bird watchers on ebird to give real information about when these birds can be spotted.

2 Species Of Pelican In New Jersey:

Brown Pelicans can be spotted in New Jersey from April to January but the best months to spot them are from June to October. They are mainly seen in the south and along the coast of the state. They are recorded in 1% of summer checklists submitted by bird watchers for the state.

Although some have been seen all year, American White Pelicans are more common during fall migration and are usually spotted along the coast of the state. 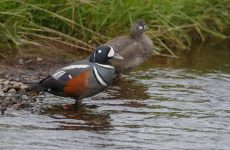