There are 3 species of kites in Arkansas that have been spotted and they are the Mississippi Kite, Swallow-tailed Kite, and the White-tailed Kite.

There are many types of birds of prey that can be spotted in Arkansas, including owls, hawks, eagles, and vultures.

Mississippi Kites breed in Arkansas and are recorded in 10% of summer checklists submitted by bird watchers for the state. They arrive in mid-March and start to migrate in September.

Swallow-tailed Kites are not common in Arkansas but you might spot some in the east of the state during migration.

White-tailed Kites are not often spotted in Arkansas and the last recorded sighting was around Mount Magazine State Park in 2017. 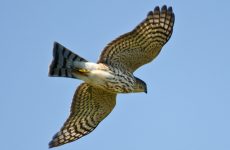