Adult Common Cranes are similar, except that males are slightly larger than females. They have black faces, chins, throats, necks, legs, and feet. They have a red patch on the crowns of their heads.

A thick, white stripe extends from behind their eyes to their backs. Their backs, wings, and undersides are slate-gray and they have black feathers that are only visible in flight.

Juveniles have the same black face but lack the bright red crown, black throat, and white stripe. Their bodies are generally gray all over with patches of brown.

The Common Crane or the Eurasian Crane is often found in Eurasia but is considered an accidental vagrant in the United States. They most likely migrate together with flocks of Sandhill Cranes.

You can find Common Cranes in wet meadows, forest clearings, wetlands, bogs, fields, and meadows with small lakes and ponds. During migration, they are also found on open, agricultural land.

Common Cranes are omnivorous so they can eat both plants and animals. They particularly like plants and will eat all parts of them, like the roots, stems, leaves, fruits, and seeds. Trees, shrubs, and agricultural lands will yield a bounty of food like berries, potatoes, peanuts, acorns, and peas.

During the breeding and nesting season, an animal-based diet is better for Common Cranes caring for their young. Insects, dragonflies, snails, earthworms, crabs, spiders, rodents, and small birds are all eaten and regurgitated for their babies.

Interestingly, while Common Cranes mate for life, they still perform their courtship rituals every time during the mating and breeding season. They perform elaborate dance rituals and vocalizations.

Nest of Common Cranes are on dense, grassy vegetation, usually inaccessible to predators and humans and they may reuse their old nests or build new ones. The female lays two eggs and they incubate them for about a month until the eggs hatch. When they do, they both feed and take care of them.

The male Common Crane incubates the eggs during the day and the female takes over at night. 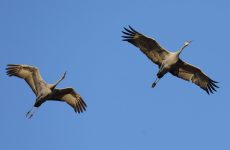