Bluebirds are iconic symbols of happiness and good cheer. For most people, spotting a bluebird nearby is a sign of hope and optimism, so of course, it makes sense to want to have them visit as nearby as possible. The challenge is that although there are bluebirds throughout the United States, they aren’t as bold and assertive as many other birds and prefer hunting live insects to seed feeders.

Bluebirds are attracted to feeders that contain mealworms. Feeders must be positioned in open, safe areas. Bluebirds frequently use nesting boxes and nesting materials provided. Adding a birdbath will also encourage bluebirds. It also helps to plant native trees and shrubs that produce berries.

Human interest in bluebirds has ensured that their numbers are rebounding. Attracting bluebirds and creating nesting boxes for them has become a popular activity. Once you know what to do, you can easily lure these little dabs of blue happiness to your yard.

To get bluebirds to move into an area, one needs a strategy. Simply providing food may not be enough. The environment as a whole should feel safe and must be appealing to them.

Fortunately, creating a bluebird-friendly setup isn’t difficult, and attracting these unique little birds to backyards has become a popular hobby. Let’s look at eight proven ways to attract bluebirds to an area.

Like all animals, the best way to attract bluebirds is to provide all their basic requirements: food, safety, and shelter. Mimicking their natural environment will also go a long way to entice them to move into an area.

Bluebirds love insects, and they can often be seen flitting about in low perches and swooping down to nab insects off the ground. If they can find a free buffet of tasty wriggly mealworms, chances are good that they will use it.

Bluebird-specific feeders have a hole that has a small entrance hole that most other birds can’t access. Be sure to hang your bluebird feeding station in a place where squirrels won’t compete for the tasty offerings.

Although they prefer live mealworms, keeping up the constant supply of wriggly nibbles can be tricky. Once you have attracted bluebirds to your feeder, gradually add dried mealworms to the live ones until you can switch completely.

Although bluebirds will take a variety of seeds and soft fruit, especially during the cooler months, they are particularly partial to insects. So if you want to attract bluebirds, mealworms should be the first item on the bluebird menu.

Unlike many other thrushes, bluebirds don’t hop about on the ground searching for insects. Instead, they find low perches and keep watch over open patches of grass.

Bluebirds are attracted to spaces where they can perch near the ground and observe open lawns or grassy fields. This allows them to quickly swoop down on any bugs they spot from their slightly raised vantage points.

Keeping lawns short and not using pesticides is a great way to attract bluebirds naturally. They also need some low perches to take cover from passing hawks but where they can keep an eye out for bugs. Low branches on large trees or even a T-shaped pole set up in an open area can work as a hunting perch in grassy areas.

The cherry on the top for most homeowners is when bluebirds nest on the property. Bluebirds usually use abandoned woodpecker holes or protected spaces in dead trees to create cozy nests to raise their young.

Providing safe nesting boxes for bluebirds is a great way to get them to move into an area. Boxes that will attract the most attention are at least 5 feet off the ground and located on a post in open landscapes.

Bluebird nesting boxes need to be pretty specific in design and must be monitored every day to deter other nuisance species like House sparrows from moving in. The North American Bluebird Society has provided detailed plans to construct ideal bluebird boxes.

4. Provide A Water Source To Keep Bluebirds Nearby

Providing a safe source of water where bluebirds can drink and splash about in safety will go a long way to ensure the little blue gems stick around. Although birdbaths are useful, bluebirds prefer moving water, so if possible, install a small fountain or dripper to attract more attention.

5. Keep Predators At Bay To Keep Bluebirds In The Area

Domestic cats, snakes, hawks, raccoons, European starlings, house sparrows, and even chipmunks can make life pretty difficult for bluebirds, particularly while they are nesting. Therefore, it is essential to take as many precautions as possible to ensure that your bluebirds’ nesting boxes won’t be raided.

The best defense against many predators, including domestic cats, is to add a stovepipe baffle to the pole below the nesting box. If you have a lot of crows or hawks lurking about that may be able to poke their heads inside the nesting box, adding a wire guard is an easy way to add an extra level of security for the resident bluebirds.

Bluebirds enjoy open spaces without too much noise and activity. That is why one often finds bluebirds in cemeteries and around golf courses. They are timid little birds that are easily frightened off or intimated, even by other birds.

Position bluebird nesting boxes in areas away from buildings and any noisy activities. One academic study indicated that fewer chicks were raised in areas where there was a lot of noise compared to quiet locations.

While it is true that bluebirds often disappear from many areas during the colder months, it is often assumed that they have migrated south to enjoy winter in the sun. However, some bluebirds just move around in an area in search of food. They can often be spotted in cold regions in small groups, even in winter.

During the winter months, bluebirds may become less picky about finding their favorite bugs and will eat forage for suitable berries and seeds. Although they appreciate feeders, an easy, sustainable way to encourage bluebirds throughout the year is to add plants that produce bluebird-friendly fruit and berries.

Some good plant choices that will provide a food source for bluebirds in winter are Flowering Dogwood, Elderberry, Common Hackberry, Smooth and Dwarf Sumac, Mistletoe, Holly, and Virginia Creeper. Native plants should be selected for the area where they will be planted, and once they are established, they usually don’t require much special care to thrive.

While removing any native birds that may set up home inside your bluebird nesting box is illegal, it can be discouraging to find that your bluebirds are being harassed by alien species, such as House Sparrows or Starlings. Fortunately, most bluebirds’ nesting boxes are designed to be too small for larger birds like starlings to access.

To encourage bluebirds does mean that you will need to deter swallows. According to the Michigan Bluebird Society, House Sparrows are the number one challenge to successfully fledging bluebirds. Nesting boxes need to be continuously monitored and managed to deter these pesky and determined bullies. 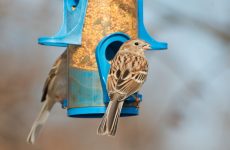 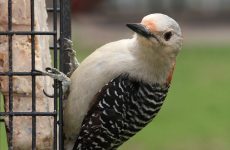 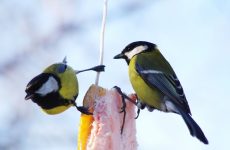 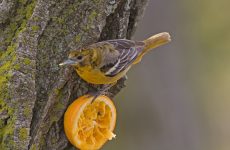