30 Birds With Hair You Need To See To Believe We can’t all be blessed with fabulous hair but these birds are really trying out a few funky styles.

So sit back and enjoy the show. Victoria crowned pigeons have amazing feathers on their head that form an elegant show stopper. These birds with big hair live in New Guinea, which is north of Australia.

This bird’s hair is so fabulous it was named after the British queen, Queen Victoria. Eurasian Hoopoes are birds with a fabulous crown of feathers on their head that they can raise in a dramatic display. The black tips on the head feathers really draw attention to this large head display.

Eurasian Hoopoes live in Europe, Asia and North Africa and there are nine subspecies.

The beak of a Hoopoe is long, strong and sharp and they have extra strong muscles to allow them to open their bill when in the soil.

Hoopoes have some nasty habits, they stab each other with their beaks during fights and may blind rivals. Females and young Hoopoes make a disgusting-smelling liquid that covers the chicks and the nests to stop predators.

The white feathers extending down the back and into the long tail, in the male Silver Pheasant, look like long hair flowing down their backs.

They live in forests in the mountains of South East Asia and China. Another pigeon with a funky hairstyle, the Western-crowned Pigeon is one of the largest pigeons and lives in New Guinea.

They have been hunted for their head feathers and mixed with habitat loss means they are now on the IUCN Red List as Vulnerable. The stiff hair-like feathers on this bird’s head frame their dramatic black, white and red faces.

They also have long grey feathers cascading over their bodies which look like hair.

These birds with hair on top of their heads look coiffured as if they have stepped straight out of a hair salon.

The crest is a genetic mutation causing a skull deformity that can kill this duck.

This duck is originally from the East Indies and was brought back to Europe due to its unusual head feathers.

Not all chicks born to Crested Ducks will have the crest as it is a genetic mutation that is not always passed on. These birds with red feathers on their heads live in Africa. They sound like a monkey and are quite large.

Flocks of up to 30 of these birds with red hair adorn the trees.

The red head feathers are 2 inches high (5 cm) and really stand out against the green body. Emus are one of the largest birds in the world and they live in Australia.

These birds with black hair on their heads have striking orange eyes and are taller than most people.

They sometimes do not eat for weeks and may not drink water very often. Male Wood Ducks have iridescent green hairstyles that really pack a punch while out on the water.

They are one of the most stunning ducks in North America. Female Wood Ducks are fairly drab in comparison to males with brown coloring. What’s not to love about this funky-haired chicken. Their hair is so long it affects their ability to see properly and they certainly look like they need a haircut!

There are 3 varieties, bearded, non-bearded and frizzle. They are often used as show birds but they are also good egg layers. These massive storks from Africa feed on flamingo chicks and are known as the undertaker bird.

This bird with crazy hair has a mass of frizzy white feathers against a bald face and huge beaks.

Marabou Storks are bad-tempered and scavenge on dead animals. Their bald faces stop the blood from messing up their feathers when they stick their heads into a carcass.

They are often found in large numbers at human waste dumps in Africa. This bird with spikey hair is originally from India but now lives in the US after escaping from an aviary in Miami.

The tufted white hair on this male duck looks sophisticated. They live in Europe and feed on fish.

They nest in old woodpeckers’ nests in trees. Demoiselle Cranes are birds with long hair that arcs from its eye down over their slender necks.

The Demoiselle Crane is the smallest species of crane and they live in Eurasia.

These cranes have to fly over the highest mountain range in the world, the Himalayas, during their migartion.

They put on a great dancing display during the breeding season.

These bright and long-haired pigeons from Indian islands are related to the Dodo. 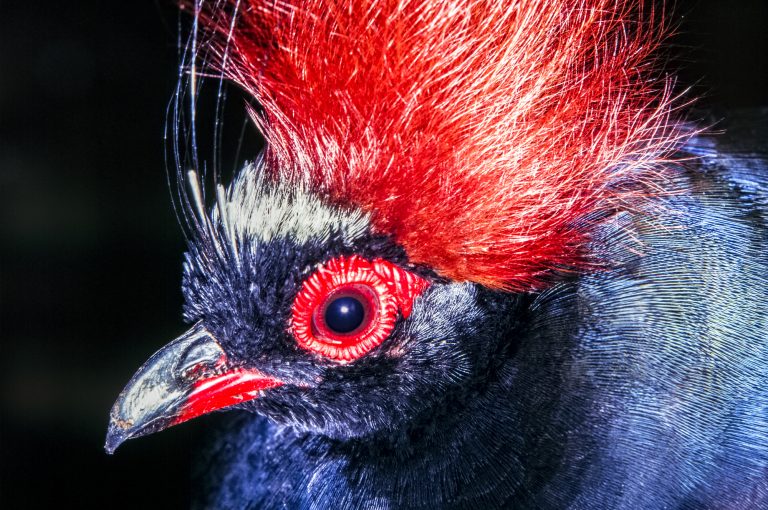 Wow, this spectacular bird with red hair is the Crested Partridge and the red bare skin around their eyes is so unusual.

They live in Southeast Asia on the ground looking for insects in the leaf litter. Large birds with long hair on their heads. These birds have head feathers that stick up in a fan shape, framed against the bright yellow beak.

Great Curassow live in Mexico and Central America in groups of around 10 and they mainly forage on the ground but roost at night in the trees.

They can be aggressive, even to humans and can live for a long time of at least 24 years.

They are listed as Vulnerable on the IUCN Red List.

The bright yellow eye wattle really stands out, along with the spiky white hair on the White-crested Helmetshrike.

They live in Africa and feed in groups in the woods looking for insects.

The largest grebe found in Europe, with fan-like head feathers in summer. The head feathers are used in courtship displays as the bird rises out of the water and shakes their heads.

They were hunted to extinction in the UK for their head feathers, which were used on ladies’ hats. This eagles’ hairstyle is less dramatic than some in color but has a certain flare. The brown highlighted shaggy hair frames their black face.

Considered one of the largest Eagles in the world they measure over 3ft in length.

They live on only four islands in the Philippines and feed on monkeys, lemurs, flying foxes, rats, birds, lizards and snakes.

Young Philippine Eagles are cared for nearly two years by their parents.

They are listed as critically endangered by the IUCN Red List. The yellow hairstyle of the Sulphur-crested Cockatoo matches the yellow highlights under the wing and tail.

They live in Australia and New Guinea and can be considered pests due to their destructive habits on crops and timber on houses and buildings.

They are highly intelligent birds that can be quite long-lived. The largest pelican in the world has fabulous shaggy hair, giving this pelican an ungroomed appearance.

They live in central Eurasia, feeding on fish in freshwater lakes and rivers. This predominantly brown flycatcher hides a bright red and blue-tipped fanned crest. Although this great hairstyle is usually hidden until courtship and breeding season.

They live in Mexico, Central and South America.

The colorful head of hair on this male duck is used in the breeding season. In winter they look similar to the female of the species and are mostly brown.

They live in East Asia but have also been imported to the UK and America and now live wild in those countries.

They are shy and breed in dense woods near shallow lakes.

This curly-haired member of the toucan family lives in the Amazon. They feed mainly on fruit but have also been known to take nestlings of other birds.

They are often kept as pets and are active and lively birds. Orange-haired birds of South America that build nests in rocky areas. Their bright fan crests and heads are striking against the black body. The spikey-haired Great Blue Turaco is the largest species of Turaco and is around 30 inches in length (75 cm).

They live in Africa in the Congo and are hunted for meat and their feathers. 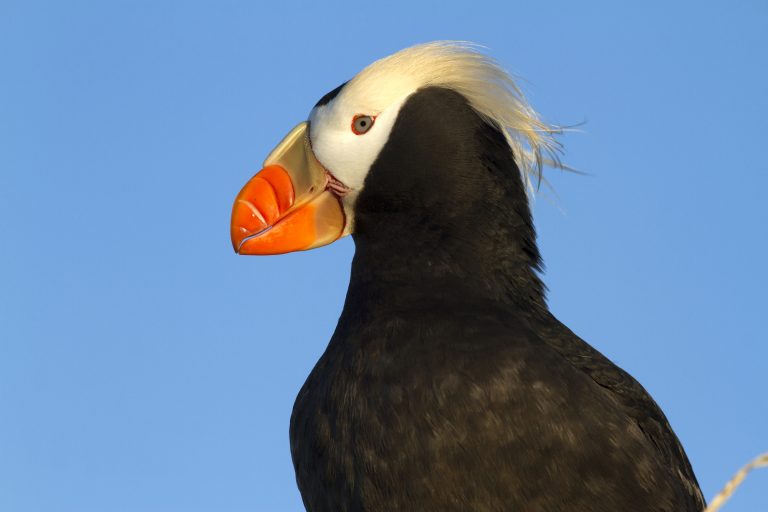 The white face mask and flowing hair of this bird during mating season is a sight you need to see along the coast of northwestern states and Alaska.

Up to 3 million birds nest in deep burrows in coastal areas. Used as guard animals by farmers to protect poultry in South America from predators, Red-legged Seriema has long spiky hair above their beak.

They make loud calls when threatened and attack with their claws and beak while running at their foe. This golden-haired bird from China has a long tail and famed rings of feathers like a cape down its neck.

They hide in woodland and despite their bright colors, they are hard to find.

This website uses cookies. We'll assume you're ok with this, but you can opt-out if you wish. Accept Read More